One of the hardest programs to track down is a good note-taking app. This seems weird, as there are a bunch of them out there. Even so, some just don’t make the grade – they’re ugly, awkward and sometimes really make it hard to jot down information when you’re on the go.

EverNote and Springpad are considered by many to be two of the best. Both have smartphone and online versions, so we’re evaluating them on their performance across devices and platforms, since accessibility is a major concern when it comes to note-taking apps.

Both score really highly in their Softonic reviews, so it’s not surprising that you might be finding it hard to choose. The best way is to install both and test them, but if you’re short on time – or motivation – we’re here to do it for you!

In the sign-up stakes, these apps are almost neck and neck. The sign ups are pretty much as painless as you get – email address, password and you’re in. SpringPad does slightly better than EverNote – you don’t need a username and there’s no security CAPCHA, cutting out two steps and winning it this round.

Result – Springpad, but only just!

The availability of platforms is crucial for a note taking application. The aim is that no matter where you are or what you’re doing, adding a note is as easy and fast as possible. Looking at our two applications, it’s pretty obvious that Evernote comes out on top.

This application is available for pretty much anything you can imagine – Online, Windows, Mac, iPad, iPhone, iPod Touch, Android, BlackBerry, Palm Pre, Palm Pixi, Windows Mobile and even a Windows, Mac and Linux compatible Firefox extension, for including online information in the click of a mouse button.

Springpad doesn’t skimp, but it’s not quite as impressive. It’s available online and for Android, iPhone and iPad. There’s no desktop version, and if you have any smartphone other than Android/iPhone, you’ll miss out.

Result – Evernote, by a mile!

Appearance is always a bit of hard one – beauty is in the eye of the beholder, right? When I started to look at the apps first, Springpad was my firm favorite. In terms of color and layout, it’s much easier to look at, with gentle pastels and a choice of backgrounds. Your notes are divided into groups – notebooks – that you can manage via a visual interface that displays the information as if it was on a cork-board. 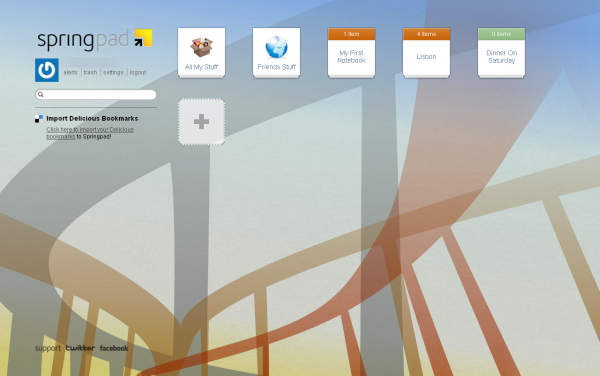 Evernote, on the other hand, is more functional. The stark, minimalist interface is a real contrast to the gentle Springpad, but some users might actually prefer it. 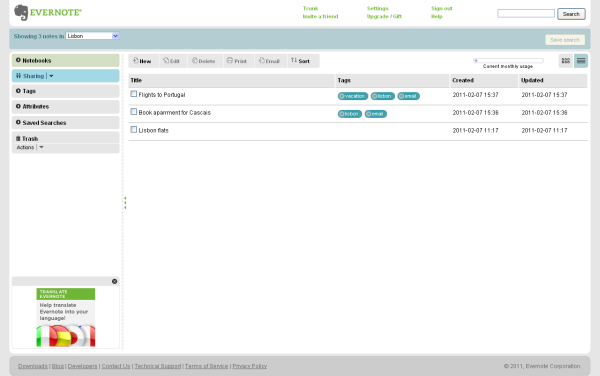 Both apps do their basic function perfectly – you can use them to take a manage notes. Just the basics don’t make a great app, though, so what else can you expect?

SpringPad lets you add lots of multimedia to your notes – video, links and files – and is good on sharing options, giving you an easy way to make your notes public and searchable, or to like them on Facebook. There’s also a reminder function, so you’ll never miss a deadline. What sets its apart from Evernote is its user community, so you can share your notes with other users, and see their recommendations and advice. Although this is a great idea, it didn’t seem very developed when we looked at it. This might improve with time, but right now it’s not living up to its potential.

Evernote’s aims seem much more humble. You can add multimedia to notes, but with a free account, it only supports audio, image or PDF. Sharing is also modest – you can email notes and share notebooks with other Evernote users, but that’s about it. There’s no other sharing outside of Evernote, and there’s certainly no integration with social media such as Twitter or Facebook. Another issue that may cause problems is Evernote’s lack of a reminder or alarm function.

Result: Springpad’s sharing isn’t living up to its potential, but it still beats Evernote hands down

Even though I prefer the style of Springpad, using both apps for a while on different devices showed me that Evernote is simpler to use. Your options are clearly listed to the left of the note, and everything is drag-and-droppable. Syncing is smooth and configurable, and the mobile versions are just as easy to get to grips with.

Nobody would accuse Springpad of being user-unfriendly, but it does take more effort to use. As it favors icons over text, it takes a few extra seconds to figure out which does what. This app seems to take more clicks to get to your final destination, and the search isn’t as powerful, but it’s a minor gripe.

By no means is it an out and out winner, but it’s slightly easier to sign up for, and for some users, much prettier. It’s also got more sharing features and, although it didn’t win the section, is very easy to use.

That said, both apps look very different, so if you’re going for a cleaner, more adult style, Evernote might still get your vote. If multi-device support is also a concern, it blows Springpad out of the water, and this alone might be enough for some users.

In all, both apps are very usable and evenly matched. In our tests, however, Springpad did come out as the overall winner, and for casual users, that’s probably enough of a recommendation!

If you liked this article then you'll love our newsletter!

Join us to receive hilarious memes, photo galleries, tips&tricks, and the best games!